Recently I was asked for advice on a family vehicle to carry two parents, two children and, occasionally, two grandparents. I suggested a  2013 Kia Rondo Diesel or a 2012 Prius V. These have seven seats, are about the same size and fuel efficiency. The Kia was upgraded significantly in 2013. The Prius V has not changed much since it was introduced in 2012 and they age well, so there is little point getting a new one.

These are more car-like than the larger people movers and SUVs. The catch is, with all three rows of seats occupied, there is not much room for luggage. But most of the time you are likely to be using only two rows of seats and so have a very large boot. For Griswold holidays, you can add a roof-box ($1,000 with mounting bars). 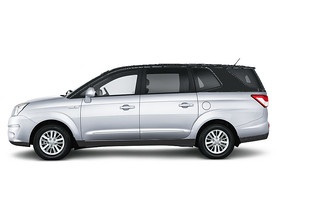 For something larger there is the 2013 Ssangyong Stavic. These are low priced, mainly due to the ugly front end of the previous model. The 2013 model looks bland, rather than ugly. But it still looks odd at the back, and too large for its tiny wheels. This might be improved with a Range-Rover-like colours scheme, with the lower edge of the vehicle painted black, along with the pillars, up to the roof rails.
Posted by Tom Worthington at 12:51 PM