MOOCs a Rerun of Dotcom Crash? 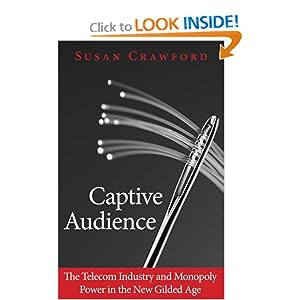 Susan P. Crawford provides a detailed and well researched analysis of issues with the convergence of the US telecommunications, TV and cable industries in "Captive Audience: The Telecom Industry and Monopoly Power in the New Gilded Age" (Yale University Press, 2013, ANU Library call number KN342.C73 2013). However, the book assumes the reader is familiar with the USA and does not discuss the issues in the global context. It would have helped to have more comparisons between the US situation and the rest of the world. Also there is little mention of the role of the World Wide Web and the arrival of Apps for mobile devices.

The analysis of the failure of the AOL - Time Warner merger is of particular interest. It may seem like ancient history, but similar mergers between old and new media are proposed today. One area which is developing rapidly is that of e-learning, with universities forming consortia to deliver free on-line courses. This has echoes of the 2000 Dot-com bubble, where companies rushed to set up on-line businesses, with no plan for attracting revenue.
Posted by Tom Worthington at 1:15 PM