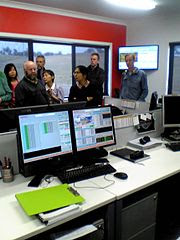 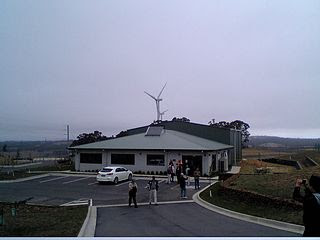 The ANU Energy Change Institute (which I am a member of), had a tour of the Gunning Wind Farm on 11 February 2013. The site is 15 km north-east of Gunning, near Canberra. The 31 wind turbines on the Cullerin Range, are monitored from a small building which also houses maintenance personnel. Operation of the turbines is from ACCIONA's control room in, Melbourne, which also controls other wind farms in Australia. SCADA (supervisory control and data acquisition) software allows personnel to monitor each turbine.

The wind farm is relatively quiet with the sound of the blades overhead barely audible over the sound of the wind. The only time the turbines became noticeable was went one was feathered so the tour party could look at the equipment inside the base of a tower. As the blades were rotated to stop them catching the wind the sound became much louder, but still much lower than traffic noise of a city. Opening the inspection door to the tower was a complex process, requiring the personnel to first call the control room for permission, wait for the mill to stop and then unlock and latch open a very heavy steel door.

The wind farm is an expected life of at least 25 years. The equipment is made overseas. One point discussed by the tour was local manufacture of the steel towers. These require special equipment for the thick curved sections. I suggested that the suppliers for the Australian Submarine Corporation (ASC) may be able to manufacture these as submarines require heavy curved steel sections manufactured to fine tolerances.

ps: The next class for my ICT Sustainability course starts on Monday at ANU. One of my students previously researched if it would be feasible to use a wind farm to power a data centre.
Posted by Tom Worthington at 9:37 AM