The speech by Tony Abbott, opposition leader, at the Universities Australia Higher Education Conference yesterday, concentrated on on-line education, judging from the published summary. Universities Australia had put twenty two proposals to the "Incoming Government". However, Mr. Abbot appears to have directly addressed only a two of these in his speech:
Of the twenty one initiatives the universities proposed to take, the opposition leader appears to have only supported three:
Mr. Abbot highlighted on-line learning, and in particular Massive Open Online Courses (MOOCs), pointing out these provide opportunities but also challenges for universities.

The opposition also proposed to establish a new Colombo Plan. It should be noted that the Colombo Plan, for cooperative economic and social development in Asia and the Pacific, is a multinational initiative which is still in operation, with Australia providing university education as part of the plan. Proposals for a new plan would therefore need to be negotiated with the other countries involved. The plan is named after the location of its foundation meeting in Colombo in 1950. There is a detailed history of the politics behind the plan in "Facing Asia: A History of the Colombo Plan" by Daniel Oakman (ANU e-Press, 2010). The Colombo Plan Secretariat is still located in Colombo, Sri Lanka. 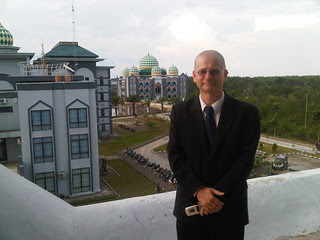 As it happens I will be speaking on e-learning at an international conference in Colombo in late April. I discussed co-operation on e-learning for sustainable development in Indonesia late last year.
Posted by Tom Worthington at 9:43 AM