Making Schools Relevant for the Next Generation 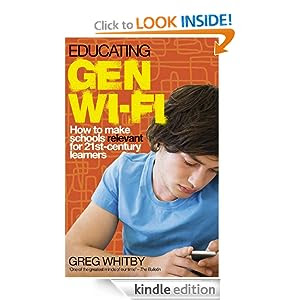 In "Educating Gen Wi-Fi: How We Can Make Schools Relevant for 21st Century Learners" (ABC Books, 2013) Australian educator  Greg Whitby  provides a practical prescription for better education. Whitby suggests teachers need to be "... supported in the ongoing professional learning by close and regular collaboration with their colleagues".
In the first chapter Whitby points out that the Socratic Method of  question and answer teaching goes back to ancient Greece. He then jumps forward to the invention of the printing press, which enabled mass produced text-books to mass schooling of the 19th century. After a brief history of Australian schooling from federation, Whitby then discuses the 1970's open classroom (which has some similarities to the MIT iCampus of the early 2000s). After briefly touching on the introduction of computers in NSW in the 1980s, Whitby  turn to the Progressive Education pedagogy of the last 19 and early 20th century.

Chapter 2 looks at today's schools, with information overload and rapid changes, such as email being already seen as out of date by students. In chapter 3 the idea of diversity being normal is introduced, but it is not until the next chapter it is explained how this can be done, with a "toolbox for toady's teachers". This toolbox is essentially a collection of today's online tools: which are now available through free open source software, such as Moodle. At this point Whitby  emphasises that teachers need to be learning focused, not teaching focused. But I would have liked to hear more about how teachers can get the assistance they need, including resources and training, to do this.

Chapter 5 addresses assessment, which is so important that perhaps it should appear earlier in the book. Assessment for learning is stressed, rather than assessment of content (as in the NAPLAN testes). After an all too brief chapter on assessment, Whitby moves on to classroom design in chapter 6. This classroom design is a topic I have spent considerable time on over the last few years in the university environment. I concluded that schools were at least a decade ahead of unviersit\ies in their design of classrooms, so I was interested to hear what was said about school design. Whitby  suf\ggeses classroom which are not fully enclosed. The classroom should have at least three points of focus(such as a board, stage and a reading chair). Also provision for three teachers should be allowed (much like a university TEAL room).

After trying out various learning commons, my ideal would be something like a space with:
One claim by Whitby will be a surprise for many, that class size is not an issue. Research shows that the quality of the teaching is much more important in terms of student results than the number of students in the class.  For anyone who as recently undertaken a course in education (as I have recently done) there will be little surprising or revolutionary in what Whitby  has to say. These are methods of education which have been researched and proven to work. The techniques advocated for schools are essentially the same as are now being applied at university for postgraduate learning. In 2008 I announced that I had given my last  lecture and would instead be using e-learning and seminars.  At the time this was seen as a little eccentric by my colleagues, but is becoming increasingly common.

What was disappointing was that Whitby does not provided clearer policy prescriptions for education. However, if anyone doubts the practicality of what is proposed, they need only need visit the multi-purpose learning centre at St Monica’s Primary, North Parramatta, NSW
to see this form of education in action.

ps: Thanks to the National Library of Australia for the copy of the book and a PC to type this posting on in the main reading room.
Posted by Tom Worthington at 4:03 PM