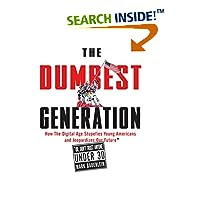 In "Screen no match for the page in education" (Higher Education Supplement, The Australian, 8 October 2008) Mark Bauerlein argues that reading on a computer screen encourages quick skimming and therefore is not suitable for long complex material needed for education. However, reading quickly is not a lesser form of reading. This is a difficult skill needed to solve the problems of the 21st Century.

In my courses on web design and e-document management at the ANU I cite some of the same sources Mr. Bauerlein uses, but reach the opposite conclusion. Jakob Nielsen and Donald A. Norman are sources of inspiration for designing computer based information systems, rather than reasons not to use such systems. Information presented on a screen needs to be designed differently to a printed page.

Carving on stone was the form of communication used for important messages of long term value for much of written history. If Mr. Bauerlein's logic was followed, we should not be using books, as they were introduced for material designed to be read quickly and for short term disposable information. Typefaces such as Times New Roman, evolved from those used for carving on stone, for quicker reading. About the only institution to continue to develop rocks as a means of communcation in the last thousand years is Parliament House Canberra, for which Garry Emery designed a new typeface suitable for carving in stone.

Taking the argument back further, universities should not use books, or printed material at all, as these make the students lazy. We should return to the approach to learning which applied for most of human history, where the teacher recited the text and the students memorised it.

To suggest banning the book in universities is taking an argument to ridiculous lengths, as is proposing to not make use of computers. Computers are a useful way to transmit some forms of information, just as books are for other forms of information. Computers have some strengths and limitations, as does ink on paper.

Universities and academics needs to be able to work efficiently and react quickly, as well as think deeply. This is a necessary aspect of the world they are in. Computer systems offer some ways to make their processes more efficient. What they need to do is critically assess where computers can be used best.

As an example I set students assignments where they are required to carry out analysis of documents thousands of pages long. There is not time to read these documents, just as there is not in the real world the students are being prepared for. There is no option of taking years to read all the documents, as by the time you finished, there would be thousands more documents to read. The students need to learn to use computer based search tools to scan through the text to find relevant sections and then quickly form an assessment by skim reading what is important. They then need to concentrate their attention on the small important parts of the written work.

With more than a little irony, "Screen no match for the page in education"is available for reading online, as is Mr. Bauerlei's book: "The Dumbest Generation: How the Digital Age Stupefies Young Americans and Jeopardizes Our Future (Or, Don't Trust Anyone Under 30)".

A quick scan shows the The Dumbest Generation has 72 references to the Web and 29 to the Internet, but only one to Berners-Lee, inventor of the web. The single reference to the origin of the web suggests it was "hacked together ... as a way for scientists to share research". But if you read the original proposal for the web, ("Information Management: A Proposal, Tim Berners-Lee, CERN, March 1989, May 1990) rather than making the mistake Mr. Bauerlei did of just skimming the Wikipedia entry, you will see this was a carefully thought out proposal, not a hack.
Posted by Tom Worthington at 2:08 PM