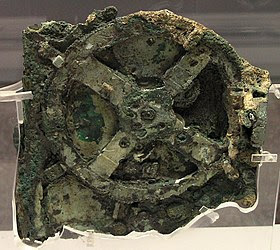 The National Archaeological Museum of Athens was a bit of a disappointment. This holds important artefacts from ancient Greece, but perhaps too many. Any one room of the museum could justify a whole museum in its own right. As a result the impact of individual items is lessened by their quantity. But feeling like I has seen enough old marble I was caught up short by a small corroded piece of metal in a small case. This was the Antikythera mechanism, an ancient mechanical calculator, far more complex than an astrolabe and possibly designed by Archimedes.

Some months ago I attended a talk where the speaker claimed, not completely seriously, how modifications to the design of the Antikythera mechanism were identifiable in the mechanism and these were the world's first known "software upgrade". Seeing the real thing was very exciting.
Posted by Tom Worthington at 6:12 PM