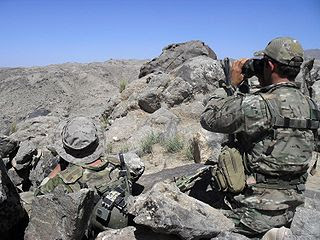 This is to suggest that the Australian Air-force and Navy adopt the same Australian Multicam Camouflage Uniform (AMCU) as the Australian Army. The RAAF's recently introduced blue General Purpose Uniform (GPU) should be discontinued as it makes personnel very visible. The new RAAF GPU is a blue version of the  Australian Multicam. The RAAF claim this is a "provides a unique and easily identifiable Air Force presence ... still effective in meeting service requirements ... non-warlike environments...". However, the Multicam pattern is worn my many nation's military and similar patterns by potential foes. When rendered in blue the pattern does not look distinctly Australian. The blue color provides no value as camouflage and would make RAAF personnel very obvious targets.

Australian Army, RAAF and RAN personnel are increasingly operating in a joint environment and one where the distinction between peace and war-fighting are blurred. It makes little sense for the joint logistics system to have to carry three uniforms, identical except for color, two of which are unsuitable for use in an operational environment.

The idea that RAAF personnel would wear a uniform not suitable for combat on a peacekeeping operation does not accord with modern practice. A militia force is not going to send advance warning of hostile intent and then politely wait while the RAAF personnel change out of their blue uniforms into camouflage, before attacking. Instead RAAF personnel will be targeted first, as they will be most visible.

A better alternative would be for the Australian Army, Navy and Air Force to wear the same camouflage uniform, with service specific head-wear and patches. The uniforms should also have removable high visibility markings. All services will require high visibility patches on their clothing for some duties, for example on the flight deck of an amphibious ship.
Posted by Tom Worthington at 9:13 AM