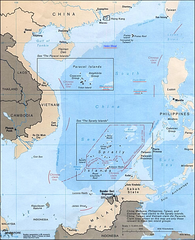 Greetings from the ANU ASEAN Society meeting in Canberra, where Professor Leszek Buszynski and Thanh Hai Do are speaking on "Prospects and perspectives on the South China Sea Dispute". This refers to an area claimed by Brunei, the People's Republic of China, Taiwan, Malaysia, the Philippines, and Vietnam.

Professor Buszynski said that clashes between some vessels was possible but outright war unlikely. He said this started as a post-colonial effort to define maritime boundaries which was put off until fishing and oil drilling right came up in the 1970s. The issue of sea lanes then arose. Lastly Professor Buszynski emphasized the strategic importance of the area to China and concerns Japan has over this.

Interestingly, Professor Buszynski claimed that China exaggerated the oil reserves of the area. However, independent oil and gas resource estimates indicate the South China Sea is minor in world terms.

Professor Buszynski characterizes China's claims to the South China Sea as based on history and those of the other countries on law.

Thanh Hai Do then discussed the Vietnamese perspective on the dispute. He pointed out that while countries of the region talk of peace and trade they are investing in sophisticated weapons. It occurs to me that Australia is part of this arms race, now having the most advanced amphibious warfare ship in the region (HMAS Canberra), building very advanced destroyers (with the option of anti-ballistic missile defence), has ordered stealth supersonic aircraft and, less credibly, is planning the world's most advanced conventional submarines.

Thanh Hai Do pointed out the importance of the South China Sea to regional and world trade. He then summarized harassment of non-Chinese fishing vessels by Chinese coastguard ships and interference in oil exploration.

An interesting aspect of the disputes is that China's use of large numbers of lightly armed coastguard type vessels might make the use of conventional warships in response ineffective. I suggest it might be useful for nations to instead adopt the equipment and tactics of the Sea Shepherd Conservation Society. The Society has experience in combating fishing operations of questionable legality using a combination of harassment and public relations. This might be done at arms length with countries of the region secretly supporting non-government organizations countering Chinese harassment by using the same tactics. These NGOs would be secretly supported with intelligence information from the military force of the region.

Professor Buszynski pointed out that claims to the South China Sea of countries apart from China are based on international law. He characterized the Chinese claims as being unclear and with disputes between different Chinese experts. However, none of this appears to me to be of much importance in an international dispute. The current oil dispute between Australia and Timor-Leste shows that even a country such as Australia, which normally supports the rule of law, will deviate from this and engage in questionable activities, when it has the military power to do so and a lrage economic incentive.

Professor Buszynski commented that ASEAN does not have a unified position on the South China Se, with Vietnam and the Philippines not receiving support from other members, apart from some recent comments from Indonesia.

Professor Buszynski commented that other countries, including Japan and India will become involved if China presses its case. He suggested that in five to seven years, if the Chinese government is feeling secure, it may be prepared to negotiate an agreement.
Posted by Tom Worthington at 4:15 PM