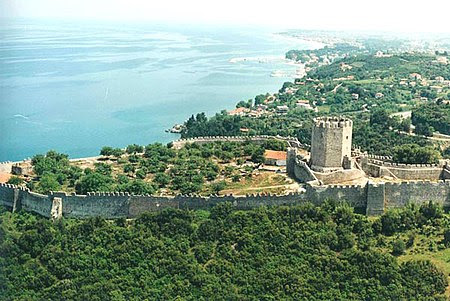 In 2008 I traveled clockwise around the Aegean, from Turkey to Greece, for a wedding at Palaios Panteleimonas. in Thrace. I  started in Istanbul, went down through Turkey, across to Rhodes, Crete, Athens, Thebes, Delphi, Platamon, Thessaloníki and back to Istanbul, by train, bus and ferry. Recently I was reminded of this by the play Antigone set in Thebes. Also only recently I found that the Castle of Platamon, where I stood on the shores of the Agean and looked at Mount Olympus, was the sight of a significant battle by ANZAC troops in WW2.

While standing at the Castle of Platamon, looking up at Mount Olympus I thought "not so impressive, where are the gods?". At that moment the clouds parted and a single shaft of sunlight shone down on the summit of Olympus. I apologized to the gods and left the hill, lest a thunderbolt followed. ;-)
Posted by Tom Worthington at 12:52 PM