Play About Career and Thatcher's Britian 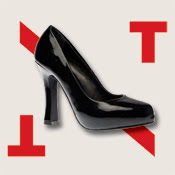 The opening of the play "Top Girls" at the New Theatre Sydney last night was a little confusing and a little confronting. The fist scene is a dinner party where the guests may be figments of the host's imagination and metaphors for,  something. We then move to a cubby-house in a working class background and then a recruitment agency in Thatcher's Britain. Seven female actors play various roles, but are they all the same person?

"Top Girls"is on at the New Theater, Newtown, Sydney, until 3 August.
Posted by Tom Worthington at 7:13 AM