The First Garden in The Sydney Botanical Gardens

Greetings from inner Sydney, where I have just been to a performance of the play "The First Garden" in the grounds of the Royal Botanic Gardens. The play is a fictionalized account by Chris and Natasha Raja of the creation of what is now the Olive Pink Botanic Garden in Alice Springs. The play explores the work by by Olive Pink, anthropologist, gardener and supporter of Aboriginal land rights. In conjunction with the play, there are some of Olive Pink's botanical illustrations on display in the gardens, along with her notebooks and her typewriter (which features in the play).

Tonight's performance was made more topical by the presence in the audience of the real person upon one of the characters is based. Afterwards it was curious to see the actor playing the person, next to the realty. The play is on until Saturday 17 March 2013, with a special free performance for school groups 11am Thursday 14 March.

The play takes place on the Band Lawn at the gardens, overlooking Sydney Harbor, the Sydney Opera House and the Sydney Harbor Bridge. The lawn is transformed into Alice Springs, by the use of a canvas painted to look like desert sand, a painted backdrop of the mountains made famous by Albert Namatjira. Like any outdoor performance it can be difficult to hear the actors at times, but the actors were able to project. The performance was made more magical by the excellent use of live music. Natasha Raja gave a credible performance as the elderly Miss Olive Pink. Scott Fraser (previously in "The Ship That Never Was") was less successful as Captain Southern. He gave a credible presentation of urban planner Henry Wardlaw (with the real Henry Wardlaw in the audience). Eshua Botton stole the show with a powerful interpretation of an aboriginal man trapped between two cultures. 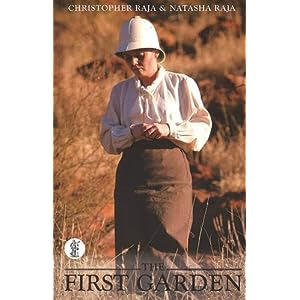 The Script of The First Garden

(Currency Press, 2012) is available, as is a biography: The Indomitable Miss Pink: A Life in Anthropology

(Julie Marcus,NSW University Press, 2002). The University of Tasmania has Works by Olive Pink and the Naitonal Library of Australia has a list of books about Olive Pink.
Posted by Tom Worthington at 10:06 PM