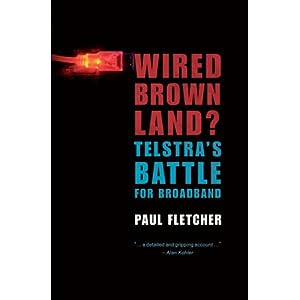 Paul Fletcher MP, will speak on "Why the NBN business model is deeply flawed ...?" at the Australian Computer Society (ACS) meeting in Canberra, 12 Noon 28 February 2012. This is a surprising topic for an ACS talk, as they are usually not so politically charged. Also Malcolm Turnbull MP usually makes the opposition statements on broadband policy. But Mr. Fletcher was Director of Corporate and Regulatory Affairs at Optus for eight years and later wrote the book "Wired Brown Land?: Telstra's Battle for Broadband" (UNSW Press, 2009), so is qualified to speak.

Yesterday Mr. Fletcher spoke on the less inflammatory topic of "The right role for Government in ICT Policy" at the Kickstart Forum in Queensland. As reported in IT News, he went beyond the NBN and also discussed eHealth and computers for schools policies of the government.

While I agree with Mr. Fletcher that the government can't mandate take-up of the NBN and wireless will be more popular than the government expects, I see fiber optic and wireless to be complementary, rather than competing. The NBN can be used to connect the millions of base stations which will be needed for wireless, as well as provide direct high speed broadband for applications unsuitable for wireless.

I agree with Mr. Fletcher that the "big bang" approach to computers in schools was not good long term policy. But it was better than not investing in computers in school. What is missing is a policy for training teachers in how to use computers for education and in creating Australian educational content. As I put to the Minister for Schools last week, without this investment Australian school students will be taking their on-line lessons from overseas teachers using overseas content, via the NBN. This will cost Australia thousands of jobs and billions of dollars.

The Personal Electronically Controlled Health Records programs of the Government has some problems and looks expensive. But like the NBN and computers in schools, these programs are relatively cheap when compared to the potential benefits and savings. They are also going well compared to other programs, such as the "Home Insulation Program".

ps: I am a member of the ACS Telecommunications Board, but the views expressed here are my own.

Posted by Tom Worthington at 8:18 AM