Replacing the spikes (Cleats) on golf shoes takes a little preparation, the right tools and the right replacement spikes. The first step I took was to scrub the grass and dirt from the bottom soles of the shoes (good time to clean and polish the uppers as well). 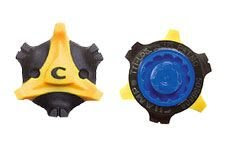 The spikes are designed to stop the shoes slipping on wet grass. Old golf shoes have metal spikes, but these are now banned on most golf courses. Modern shoes have plastic "soft spikes", which bend on a hard surface, causing less damage.

There are two common locking systems: Q-LOK and Tri-LOK (also called "Fast Twist"). The locking systems use a plastic thread which takes only about a half turn to lock. Other golf shoes have a large bolt thread holding the spikes on (Large Thread), there is also a smaller thread (Small Thread). The replacement spikes may be sold individually at your pro-shop, but usually come in packs from golf stores. The number of spikes on a show varies. You can replace as many as needed.

It is difficult to tell the different attachment systems apart: small from large thread and Q-LOK from Tri-LOK. So unless you have the details for your shoe, you may be better off taking the shoes into a pro-shop or golf store to get the right spikes. 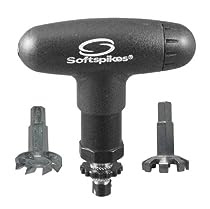 All these spikes have two small holes into which you can insert a key to turn them (counter-clockwise to remove). The holes may be filled with dirt, thus the need to clean the shoe first. The spikes can be hard to turn. I found some spray lubricant (WD-40 or similar) helped. I found a set of needle nosed pliers worked better than the flimsy key. You can also use a Golf Shoe Spike Wrench, which is shaped to fit the spike and provides better leverage. After removing the old spikes I cleaned the threads with a toothbrush, soap and water. Replacing the spikes is easy, bur remember the locking systems only need a half turn or so: don't turn too much or too hard. 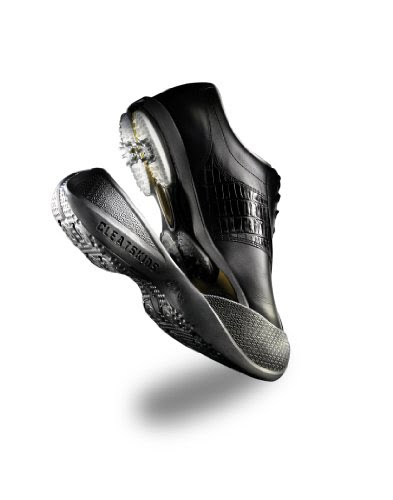 Even spikes are not permitted in the clubhouse (and wearing them on hard paving wears them out). Golf overshoes (galoshes) are available which cover the spikes. These are made from soft foam plastic, similar to "Crocks" brand sandals. The overshoes are also made for football boots and cycling shoes.

The Cleatskins brand overshoes come in a range of US shoe sizes: