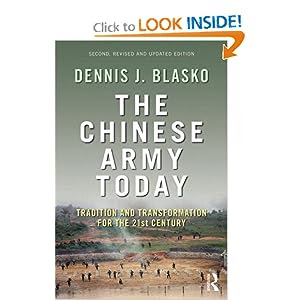 Dennis J. Blasko's The Chinese Army Today is a detailed scholarly analysis of the role, structure, doctrine, training and equipment of the People's Liberation Army (PLA). Translating the details into western terms can be complex: the PLA also has Navy, Air Force, Naval Air Force and Marine elements. The most important point Blasko makes is that while the Chinese army does some things differently, it has a good grasp on what its job is, is striving to modernize.

As Blasko explains, many people in China wear military looking uniforms, but are not part of the Army. On a visit to Beijing to help the Chinese government with the Olympic Games, I was bemused to find a very tall guard in a military uniform standing to attention in the foyer of the BOCOG building all day. It was very tempting to snap off a salute and see if he responded. I worked out he was the equivalent of an Australian government security guard.

As well as the People's Armed Police (PAP) and the People's Militia, China has uniformed civilians in government agencies. This causes confusion when estimating the size of the Chinese military versus western armies. The confusion is not all one sided: western armies have civilian public servants and contractors operating alongside the military in combat areas (such as the United States Army Corps of Engineers). I have spent a few days in uniform on a military exercise, as a civilian expert (and a week standing in for my one star, brigadier ranked military boss).

There are lessons to learn from the PLA for western military, in areas such as cyber-warfare: combining military and civilian assests.
Posted by Tom Worthington at 5:21 PM