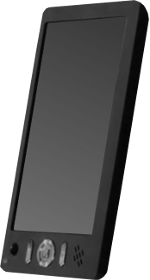 The Indian Minister for Human Resources Development, Shri Kapil Sibal, launched the ‘Aakash’ (आकाश), low cost tablet computer on 5 October 2011. The device is intended for educational use, first by university students, at an estimated cost of $50 per unit in bulk to government. The largest cost saving feature is that the device has a resistive, rather than capacitive, touch screen. While described as being developed for Indian educational use, this appears to be Datawind Ltd's Ubislate device. It has a 7 inch 800 x 480 pixel colour LCD screen, Google Android 2.2 operating system, 256 Mb RAM, 2 GB flash memory.

Media reports concentrated on the low cost and the poor sensitivity of the touch screen of the Aakash. In my view a laptop with a screen of around 12 inches, such as the Kogan Agora, would be more useful for university students. This is large enough for daily work, but small enough to fit in a school bag (being about the size of an A4 pad of paper). The lowest cost model of the Kogan Agora was sold for $349, but this was with 30GB of flash, 1GB Ram and an Intel SU2700 Pentium Processor. A lower capacity device could be procured in bulk for around $100.

The Indian government plans to trial 100,000 tablet computers. What was not mentioned in most media reports was that the Indian government is also connecting 416 Universities and 20,000 colleges with fiber optics under the "National Mission on Education through Information and Communication Technology Project: (NME-ICT).

As well as connectivity there are plans for e-content creation. E-learning materials are available for peer review in the categories of Advertising and Sales Promotion, Botany, Computer Science, Digital Library and Information Services, Fine Arts, History, Mass Communication & Journalism, Physics and Zoology. While the materials are being prepared by various institutions, the Indian government will retain ownership, to allow wide distribution. Open-source software is being used.

Posted by Tom Worthington at 8:34 AM