Futuro House on Display at Unviersity of Canberra 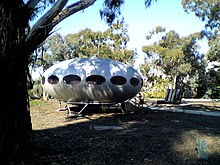 In the MOMA book "Home Delivery: Fabricating the Modern Dwelling" Barry Bergdoll and Peter Christensen refer to the Futuro prefabricated house. It happens that I used to live about 40 metres away from an example of the Futuro home in Canberra. It was part of the Canberra Planetarium and Observatory, which was run by the "Dickson Tradies" club as a community facility, but it closed in early February 2008. 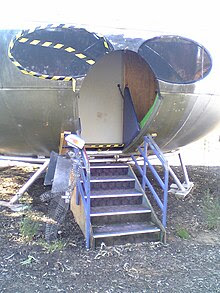 This building was moved to the University of Canberra in 2010 to be restored by conservation students. The building is not open to the public but the outside can be seen, to the east of the "Hub", next to David Morris' steel sculpture.
Posted by Tom Worthington at 10:58 AM