Greetings from the Australian National University in Canberra, where I am attending a symposium on "Climate Change and Energy Policy in Europe and Australia". This was well timed with the passing of the Australian carbon pricing legislation through the House of Representatives yesterday. There is very much a sense of celebration and that US and Chinese governments will now follow Australia's lead.

The European Union (EU) is starting the third phase of its emissions trading scheme. There have been problems with the system previously, with too many free permits issued to polluters, lowering the price. Also the security of the on-line trading system was compromised. Australia should be able to avoid these problems. Firstly a fixed price is being initially, so the scheme can be bedded in before there is trading. Secondly, Australasia's IT professionals should be able to build a secure system. In particular the students I have been teaching ICT Sustainability to for the last two years should be able to assist.

There may need to be some additional investments needed to implement carbon emission reductions. One example is an upgrading of the Australian electricity grid to support distributed renewable generators. Arnold McKinley will talk on "Issues of PV Integration with the Electrical Grid", at the ANU Research School of Engineering, at 3pm.

Dr Karen Hussey has provided the best metaphor for climate change policy, likening it to hair color: it may not cover gray completely at first, but if applied over time it will improve the situation. ;-) 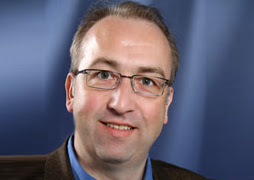 This presentation will set the scene for further discussion by elaborating a selection of European climate change issues. The focus will be on three issues:

Both EU transfers to support projects in developing countries that help adaption to and mitigation of climate change are considered.

Professor Dirk Rübbelke is based at the Basque Centre for Climate Change (BC3) in Bilbao (Spain). He worked as Assistant Professor in European Economics at the Technical University Chemnitz, where he also obtained his doctorate. During 2008-2010, he was Senior Research Fellow at the Center for International Climate and Environmental Research in Oslo (Norway). Professor Rübbelke’s has published extensively on his research interests, which include environmental economics, public and financial economics, and international climate and energy policy.

The EU Emissions Trading Scheme (ETS) is currently the largest trading scheme for greenhouse gas emissions in the world, and is the most
important climate policy instrument in Europe. This presentation focuses on the EU’s ETS and its effect on emissions reduction in Europe on the basis of the recent results of ZEW’s 2011 CO2 Barometer survey among
German companies. It will also discuss the impact of the Low Carbon Economy Roadmap 2050 that was adopted by the European Commission in March 2011.

Professor Andreas Löschel heads the department ‘Environmental and Resource Economics, Environmental Management’ at ZEW. He is Professor of Economics at the University of Heidelberg and Associate of the ANU Centre for Climate Economics and Policy. Professor Löschel obtained his doctorate in economics from the University of Mannheim (2003), and was advisor to the European Commission, the European
Parliament, and national ministries in Germany and the UK. He has published widely in on economics of climate change and energy policy, and has research interests in quantitative economic modelling.

Australia and the EU have often been at odds over international climate change processes. This does not stem from disagreement about the science or the need for a low carbon transition. Rather it represents
cultural and geopolitical divergences as well as differences in economic circumstances. While collaboration and policy alignment are now the norm, residual suspicion on both sides is occasionally evident.

Professor Howard Bamsey is Adjunct Professor of Climate Change & Energy Security at the United States Study Centre of the University of Sydney and at the ANU Centre for Climate Economics & Policy. He was Deputy Secretary of the Department of Climate Change and Energy Efficiency (2008-2010), and Australian Ambassador to the United Nations (2002-2007). He was one of Australia’s pre-eminent officials on climate change, energy efficiency and energy security, and served for several years as special envoy on all international sustainability matters for the Australian Government.

Australia is about to put in place legislation that will put a price on carbon from 2012, moving to internationally linked emissions trading in 2015. Australia is likely to meet its emissions target in part by investing in emissions reductions overseas. It may be a buyer in the same international permit markets as the EU, and even linkage between the two schemes appears a possibility. EU policies and economic conditions then affect Australian carbon prices and effort, and vice versa.

Dr Frank Jotzo is Senior Lecturer at the ANU Crawford School and Director of the Centre for Climate Economics & Policy. He holds a PhD from the ANU and works on the economics and policy of climate change, as well as
on broader issues of development and economic reform, particularly in Australia and countries of the Asia-Pacific. Frank has advised governments and consulted for international organisations and is a frequent contributor to the public and policy debate in Australia and internationally.

Dr Karen Hussey, ANU Fenner School of Environment and Society
Energy Security under a Changing Climate: Lessons and Opportunities for Australia from the EU example?

Meeting Australia’s energy needs in the 21st century while simultaneously shifting to a ‘carbon neutral’ economy will require new policy initiatives. The pressures of climate change also impact on the international demand for some of Australia’s key exports, and will require private enterprise to consider new opportunities for energy-related investment. This presentation explores the potential for Australia to draw inspiration from the EU’s policies on energy security, specifically the EU-Middle East-North Africa (MENA) project ‘Desertec’, and considers Australia’s potential to be a net exporter of renewable energy.

Dr Karen Hussey is Senior Lecturer at the ANU Fenner School of Environment and Society. Her research interests span environmental policy, water resource management, the climate-energy-water nexus, and global environmental governance. Her recent publications include Water Resources Planning and Management (Cambridge UP, 2011). Karen was the ANU Vice Chancellor’s Representative in Europe for 3.5 years until 2010, fostering ANU research contacts with European institutions. She holds a PhD in Political Science from the University of Melbourne, and an M.Econ.Sc from University College Dublin, Ireland.

Posted by Tom Worthington at 9:08 AM