Greetings from the Annandale Neighbourhood Centre in the Inner West of Sydney, where a public meeting called by the Leichhardt Municipal Council has called a meeting to discuss the planning implications of the Harold Park Development. This is the redevelopment of the previous Harold Park Paceway trotting track by Mirvac in a multi-hundred million dollar development. 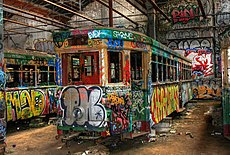 Some of the issues for the local community are traffic, public transport, parking and community housing. The site is an attractive one, being near Sydney Harbor, parkland with the Sydney Light Rail having an existing station adjacent and former Rozelle Tram Depot available for development. There is space on the site reserved for community housing, but who would develop this and where the funding would come from is not clear.

There are some good points with the development, such as extensive bicycle paths planned.

One issue raised at the meeting was possible contaminated soil on site. There was a Remediation Action Plan (Document Reference: 10011RP01_v06, 20th October 2010). The major issue for contamination are the former Rozelle Tram Depot (which is reported to still contain six vintage trams). Electrical transformers used for supplying trams with power have used Polychlorinated biphenyls (PCB), a toxic and possibly carcinogenic material.

There was also an Archaeological Assessment of the site.

There is an extensive list of planning documents from the City of Sydney:

Posted by Tom Worthington at 7:28 PM