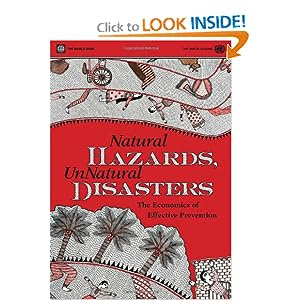 Greetings from the Australian National University in Canberra where Apurva Sanghi, from the World Bank, is talking about their new book "Natural Hazards, UnNatural Disasters: The Economics of Effective Prevention".

Apurva Sanghi outlined how prevention and preparation could lower the overall cost and effects of disasters. However, he then played a video of the "SMART: Stormwater Management and Road Tunnel" project for Kuala Lumpur. This is a combined road and flood water channel. This seemed like such a spectacularly bad idea, that at first I thought it was a spoof. However, this appears to be a project with support of the World Bank which has been built and works.

Unfortunately the World Bank has chosen to restrict access to its report. This is ironic as in his presentation Apurva Sanghi urged government to make publicly funded information publicly accessible. The World Bank is a publicly funded organisation but has chosen to use a copyright notice to prohibit copying of its report. It also chose to distribute the free online version in a difficult to read format.

The World Bank could provide one web based accessible version. This would take a few hours work and immediately make the document avialable in most of the world's major languages via machine translation. As an example of this, here is a link to my Green ICT Book machine translated into Arabic:

Instead the World Bank with AUSAID resources is going to manually translate the report into other languages and produce paper copies distributed via governments and bookstores. This will take months or years and waste millions of dollars.

I suggest the World Bank follow the example of the Australian Government and adopt a Creative Commons open access licence allowing copies of materials to be freely distributed and accessible formats. The Australian Prime minister is in Washington this week, talking to the World Bank and she might want to suggest it while there.

Description: Earthquakes, droughts, floods, and storms are natural hazards, but unnatural disasters are the deaths and damages that result from human acts of omission and commission. Every disaster is unique, but each exposes actions—by individuals and governments at different levels—that, had they been different, would have resulted in fewer deaths and less damage. Prevention is possible, and this book examines what it takes to do this cost-effectively.

Natural Hazards, UnNatural Disasters looks at disasters primarily through an economic lens. Economists emphasize self-interest to explain how people choose the amount of prevention, insurance, and coping. But lenses can distort as well as sharpen images, so the book also draws from other disciplines: psychology to examine how people may misperceive risks, political science to understand voting patterns, and nutrition science to see how stunting in children after a disaster impairs cognitive abilities and productivity as adults much later. It asks not only the tough questions, but some unexpected ones as well: Should all disasters be prevented? Do disasters increase or decrease conflict? Does foreign aid help or hinder prevention? The answers are not obvious. Peering into the future, it finds that growing cities and a changing climate will shape the disaster prevention landscape. While it is cautious about the future, it is not alarmist. ...

Posted by Tom Worthington at 12:22 PM