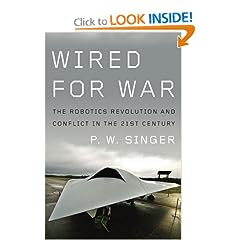 "Wired for war : the robotics revolution" (Singer, P. W. 2009) is a very readable book about the use of robots in modern warfare. It suffer from having a very US centric view of the field and providing a few too many anecdotes. But it is an easy read for someone needing an overview.

Singer starts with anecdotes about the use of bomb disposal robots in Iraq. He describes the origins and different development philosophies of the two major companies supplying the US defence department. Having attended a seminar by Professor Rodney Brooks, an Australian from Adelaide and one of the founders of iRobot, I can see that Singer's analysis is insightful.

What is missing is the discussion of the development of robotics outside the USA and the role of the scientific research community. As an example, the Aerosonde UAV, which is now being marketed to the military, was developed in Melbourne, (Australia), for taking meteorological measurements (thus the name "Aero-sonde". The aircraft was later adapted for other remote sensing and military applications.

Aerosonde pioneered small long endurance autonomous UAVs (having flow across the North Atlantic). Previously it was assumed that UAVs small enough for a person to lift would only have a range of a few hours.

One problem with innovation is having something too different from the competition. Aerosonde faced this with their early models which were controlled from an ordinary laptop computer. This removed the need for specialised control units. But rather than being seen as an advantage, this counted as a disadvantage in the logic of military procurement. With the Aerosonde Mark 4.7, released in March, there has been effort to provide compatibility with military UAV systems, such as NATO STANAG 4586 standards for UAV ground stations (also see the STANAG-4586 LinkedIn Group).

Aerosonde also pioneered the idea of UAVs being provided as a service, rather than individual aircraft purchased by the customer. This idea is yet to take off with UAV customers, but with widespread use, it appears an idea who's time has come. This concept is not discussed in Singer's book.

Earlier in the year the Australian and US Defence Departments announced the Multi Autonomous Ground-robotic International Challenge (MAGIC 2010). This is a competition researchers to build a fleet of cooperating autonomous ground vehicle systems (robots) for military and civilian emergency use. These will be tested in Australia in November 2010.
Posted by Tom Worthington at 10:50 AM