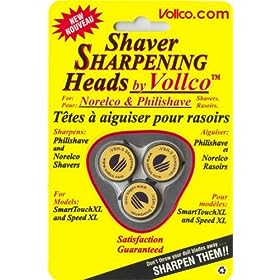 The blades on my electric razor were blunt, so I searched online for new ones. But I found they were cheaper (and more environmentally friendly) at the local store.

First I looked for a sharpener online. Vollco Sharpening Heads are available for rotary razors by Phillips/Norelco and Remington. The sharpeners consist of a plastic disks with abrasive material in the bottom. You replace the foils of the razor with these and run the razor for a few seconds, to sharpen the blades. I have used this on a previous razor and it worked okay, but these units are not approved by the razor makers and are controversial.

As I had a new razor (a Phillips Speed-XL Model using HQ9 heads), I needed a different set of sharpening heads. The blades for different model razors are different shape. The sharpener is cheaper than replacement blades (conventional wisdom seems to be you can sharpen the blades two or three times). But I found that my previous razor did not last past one resharpening.

Replacement blades are available for foil and rotary razors. One catch with rotary razors in the number of heads. My razor has only two heads but most of the replacements are sold in packs of three.

Taking into account the shipping cost and the exchange rate, I found it was cheaper to get on my bicycle and go down to the local shaver shop and buy the blades there. I found they sold replacement heads one at a time. So I was able to buy just two replacements. The shop also offered to install the replacements for me, but it was easy enough to do myself. Apart from the lower cost, there was also the benefit of lower environmental impact, as hopefully the shop's stock came by an efficient ship, whereas the online order would have come by air.

The replacement blades still cost about one third the price of a new razor, which sounds excessive. Perhaps someone would like to set up a business sharpening razor blades? ;-)

Posted by Tom Worthington at 9:06 AM