The best known GUI for children is Sugar, developed for the One Laptop per Child project. 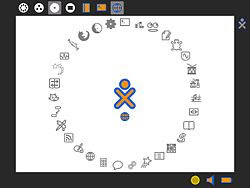 Sugar is used on the OLPC XO-1 laptop computer. Like mobile device GUIs, it concentrates on providing one application at a time. This is both to make the interface easier for the user and to make use of the limited screen, input devices and processing capacity.

But Sugar is difficult for adults, who are used to current desktop GUIs. Also Sugar is only readily available on one model of computer which is not commercially available and so not easy for schools or parents to get. Using the same GUI for mobile devices and children's computers would allow such devices to be widely available. Schools and parents would have a choice of what hardware to buy to run the interface. Also teachers and parents would be more easily able to operate the interface and the children to use other computers.

Posted by Tom Worthington at 10:02 AM