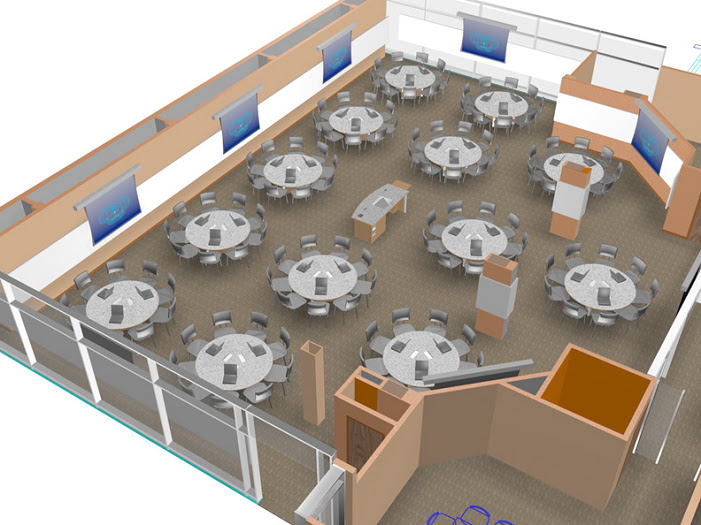 A new conference facility is being considered as part of the re-development the western edge of Canberra's CBD. The developers have asked for input for what might be built, so I have suggested a hi-tech conference center which can also be used for computer based training courses and computer assisted meetings. The facility could also double as a emergency incident-response center for government and industry, when required.

A new purpose-built conference facility could be available to the ANU community as part of the development of ANU Exchange.

Members of the ANU community are encouraged to provide input to a market assessment for a new facility to be available to both internal and external users to be undertaken by an external consultant. The project will look at aspects such as:

* The market in Canberra, recognising the availability of existing conference facilities;
* Demand within ANU;
* Competitive positioning of a possible centre in the Canberra market;
* Recommended size, configuration, features and facilities of a possible centre;
* The impact of the quality, availability and accessibility of accommodation in the vicinity on the viability of a conference centre in the ANU Exchange;
* Critical success factors for such a conference centre.

Input from the ANU community is invited, actively encouraged and very welcome.

The consultant, Mike Williams of Gary Grimmer and Company, will be available 2-4 April 2008. If you would like to meet with the consultant to make an input, please email director.mac@anu.edu.au or contact Marion Mapham on x55003 to make an appointment.

I help organize some events for the Australian Computer Society and occasionally run short commercial courses for ANU and industry courses, which need a venue. Also when consulting to government on ICT policy, as I did recently on broadband policy, it would be useful to have a computer equipped meeting room, so that views could be quickly collected.

As well as allowing for conferences of a few hundred people, it would be useful to have a facility for computer assisted business meetings and commercial training courses. Currently if you want to have a hi-tech event, you have to bring the hi-tech yourself, or go to the trouble and expense of hiring it and having it installed.

Some smaller rooms could be very useful for computer training courses and computer meditated planning meetings for government and company people, using Grouputer and iMeet. Course Management Systems, such as Moodle and Sakai, were designed for e-learning, but could also be used in computer supported decision making and in blended learning.

Previously equipping training or meeting rooms with computers for every participant was an expensive process and maintenance was complex. The equipment cost thousands of dollars per seat, needed constant attention and had to be upgraded each year. But new "thin client" Linux computers have reduced the cost to around $500 per seat. These only need basic free software installed, with all the complex stuff being hosted remotely over the Internet. The computers are about the size of a cigar box and can be installed in, or on the back of, LCD monitors, removing lots of boxes and wires from the desktop (and making the equipment harder to steal).

Such a conference center could combine the features of an MIT TEAL room and Studio Based Learning. This would have a large central room of about 280 square metres, with a flat floor. This could seat 100 people cabaret style at round tables, or about 250 theater style. All the walls would have video screens built in and there would be provision for shared computers at all the tables. The presenters could be either on a stage at the front, on in the middle, cabaret style.

Smaller rooms (about 6 x 9 m) would seat two dozen people each when seated at a computer, or more if used without computers. The smaller rooms could be dual purpose for board room style discussion and individual work (some rooms without tables could hold bigger groups). The rooms would be equipped with video screens on the walls and be capable of being computer equipped. I ran a short course for two dozen public servants, organized by ANU, using a computer science lab last year in such a mode.

The center would also have a cafe style area, with a bench for use of laptops, and tables for informal meetings.

An emergency center would normally also have specialized facilities for security and emergency power and telecommunications. It would not be feasible to build these into a conference centre, on the off chance they might be needed. But the center could be "built for, but not with" (in mil-speak). So the building would not have a backup power generator, but would have a socket on the outside wall where a portable generator could be plugged in. The wall and roof would have data sockets where portable satellite earth stations and wireless terrestrial links could be connected. The layout of the center would be designed for crime prevention through environmental design (CPED), to provide unobtrusive built in security, which could be supplemented with security guards and metal detectors to screen visitors, when required.

For more on this see:

Posted by Tom Worthington at 1:32 PM