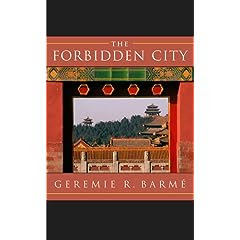 The book Forbidden City (Wonders of the World) by Geremie R. Barmé (from ANU) is due out 15 May 2008. He was reviewed on ABC Radio on 8 March. I guess his travelogue on will be a little more detailed than my Beijing travelogue. ;-)


The Forbidden City (Zijin Cheng) lying at the heart of Beijing formed the hub of the Celestial Empire for five centuries. Over the past century it has led a reduced life as the refuge for a deposed emperor, as well as a heritage museum for monarchist, republican, and socialist citizens, and it has been celebrated and excoriated as a symbol of all that was magnificent and terrible in dynastic China’s legacy.

The Forbidden City’s vermilion walls have fueled literary fantasies that have become an intrinsic part of its disputed and documented history. Mao Zedong even considered razing the entire structure to make way for the buildings of a new socialist China. The fictions surrounding the Forbidden City have also had an international reach, and writers like Franz Kafka, Elias Canetti, Jorge Luis Borges, and Mervyn Peake have all succumbed to its myths. The politics it enshrined have provided the vocabulary of power that is used in China to the present day, though it is now better known as a film set or the background of displays of opera, rock, and fashion.


About the Author
Geremie R. Barmé is Professor of Pacific and Asian History at The Australian National University.

Posted by Tom Worthington at 4:30 PM