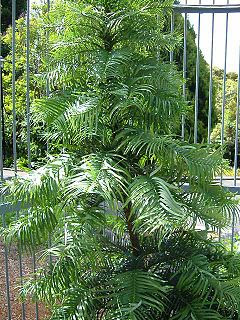 On the way from Canberra to Sydney I stopped in at the Mount Annan Botanical Gardens and succumbed to the marketing by buying a Wollemi Pine. This is a recently discovered ancient Australia tree.

Wollemia is a genus of coniferous tree in the family Araucariaceae. The Australian species Wollemia nobilis is the sole species in the genus Wollemia and was discovered in 1994 in a remote series of narrow, steep-sided sandstone gorges near Lithgow in temperate rainforest wilderness area of the Wollemi National Park in New South Wales, 150 kilometres north-west of Sydney.

In both the botanical and popular literature, the tree has been almost universally dubbed the Wollemi Pine, although it is not a true pine (genus Pinus) nor a member of the pine family (Pinaceae), but rather is related to Kauri and Araucaria in the family Araucariaceae. ...

The Botanic Gardens Trust (Sydney) licensed Wollemi Australia Pty Ltd to grow and sell the trees. You can buy one online (but they seem to be cheaper at the botanic gardens).

Hopefully, the Wollemi Pine will not become a weed. Normally when a new plant is imported into Australia, a weed risk assessment is done to make sure it is not a threat to the environment. The Wollemi Pine was already in Australia and so, is not subject to these restrictions. It has been isolated to a small valley for thousands of years, in which time the climate has changed, so no one really knows what will happened when it s cultivated widely. However, such an assessment is being carried out for New Zealand.

Posted by Tom Worthington at 5:47 PM