Replacing the Batteries in a String Trimmer

A few weeks ago I replaced the cells in a mobile phone battery with new "pre charged" ones. This worked so well I have just done the same thing with a String Trimmer. This was not easy, but will be worthwhile, as the new battery should have twice the lifetime.
The "pre charged" (or "Low Self Discharge") rechargeable nickel metal hydride (NiMH) cells are available in AAA and AA sizes. They cost more than regular rechargeable batteries, but are claimed to be able to be charged 1,000 times, twice the usual. Also they have a lower self discharge rate. As a result they can be left for months before use. 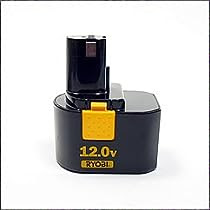 The string trimmer (also called a line trimmer), was a few years old and the battery pack was going flat after a few minutes use. The particular unit uses a Ryobi 12 Volt battery, similar to the battery in many cordless tools.

Repacking battery packs for cordless tools is a lot easier than for cell phones, as they are much larger and use standard size cells. The packs for cordless Drills and Garden Tools commonly contain sub-C cells (as fat as a disposable C size battery, but shorter). Higher voltage tools use more cells in their battery pack (1.2 Volts per cell, so 10 for 12 volts).

The sub-C cells are commonly available with solder tags attached for making up into battery packs. However, I decided to replace them with the smaller precharged AA cells. These cost about the same as the sub-C cells. They have about 17% less capacity than cheap sub-C cells, but they should outlast the C cells and retain their charge longer. Also, because they are smaller than the original cells, it is easier to pack them into the original battery box of the tool.

Lithium batteries used in laptops and some new power tools require very specialized charging and can explode or catch fire if not charged correctly . Only a Lithium battery specifically designed for the tool should be used. Do not try substituting Lithium batteries for other types.

In this case the line trimmer came with a 12 volt NiCd battery pack. The trickle charger was rated at 300 mA at 12 volts, so I was reasonably sure that it could recharge the NiMH batteries, without damage.

The first step should be to ensure the battery is discharged. I forgot to do this and was surprised by sparks when I accidentally shorted the terminals with a screwdriver. The next step is to remove the screws holding the pack together (in this case five). Inside were ten sub-C cells glued together, with connecting cables and straps welded on.

One cell was holding the battery connectors in place and I decided to retain this one (while electrically insulating it from the new cells with tape). Prizing out the old cells took some effort as they were glued in place, as well as being attached to each other. With one cell out it was easier to get the others out. I cut the straps connecting the cells together, being careful not to short the battery terminals.

At this point I discovered a small can with two wires attached, taped to one battery. This is a temperature sensor, used by a rapid charger to prevent overheating of the battery. The simple charger I have does not use this sensor, but I decided to retain it anyway and left it attached to the connector. 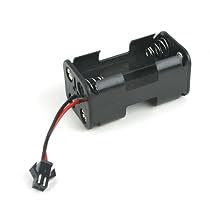 The new set of cells fitted with room to spare. I could have used a battery holder to both hold the cells and electrically connect them, but decided not to (which I regretted later).

To hold the cells together I used high temperature glue from a glue gun. This may not be the best approach, but the cells should not get hot enough to melt the glue. I simply put four cells side by side, glued them, did the same to another four and glued that set on to of the first. The last two batteries went on top. I made the pack with some spacing between the cells, both to provide some room for air circulation to cool the cells and so the cells filled the container and did not rattle around. 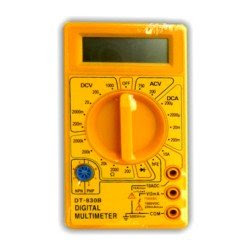 Then I soldered the batteries in series, using a soldering iron and some insulated wire. At this point I regretted not using a battery box, which would have avoided the need for the soldering, which is difficult on the flat terminals of the batteries. With a battery box I would have just had to install each cell and connect two leads from the box.

I then soldered the two leads from the new battery to the old connector of the battery pack. I had some difficulty fitting everything back in the case, but succeeded after a few attempts. I then tested the battery with a multimeter, to make sure the voltage was correct and I had the batteries wired the right way around. Apart from the tool not working correctly, connecting the batteries the wrong way (negative terminal to positive), may damage the tool, the charger ,or cause the battery to explode.

Replacing the battery in the line trimmer showed it was working. I then tried it out on the lawn and then recharged the battery.

Of course, in the end it might have been easier to buy a replacement battery pack. ;-)

Posted by Tom Worthington at 4:09 PM

Email ThisBlogThis!Share to TwitterShare to FacebookShare to Pinterest
Labels: batteries, Green IT