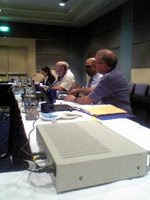 Greetings from the Australian Computer Society Council meeting in Sydney. This will be the last meeting of the ACS Council, due to a change in the decision make process. Over about ten years I have reported on the progress with adoption of IT by the ACS to improve its decision making. Here are some comments on the state, as at the last Council.

Physical arrangement of the ACS meeting room are much the same as for the November 2005 meeting. There are about 25 people in a meeting room in Sydney sitting around a U shaped table. At the open end of the U is an electronic projection screen with the agenda and papers on it. in front of them.

About 20 of the 25 people have their own laptop computer in front of the them, there are connected with a WiFi node which the ACS brings to meetings and through the hotel network to the Internet. The agenda and papers are provided electronically on a secure part of the ACS web site. The agenda is a HTML web page, with the agenda papers linked to this. The agenda papers are mostly PDF files, with some Microsoft Word documents and Powerpoint presentations. The full set of papers is also available from the web site as one zipped file.

Previously the ACS had a separate "internet" web site for the meetings. This has now been incorporated into the main site, with Council members authorized to the additional materials.

When someone wants to make a presentation at the meeting they can stay where they sit and be passed a wireless microphone and a video cable for their laptop. Most times prepared presentations are given. Sometimes after discussion proposals are modified live on the screen using a word processor. This was everyone can follow the details of what changes are being made.

One change for this council is the use of a conference audio system. This is a Phillips "Digital Congress System", similar to the one I used at the Beijing Olympics 2008 meeting in China. The chair and executive at the meeting each have their own microphone, other delegates share one microphone between two people. The microphone units also have a loudspeaker and a push to talk button. A light on the microphone helps indicate to the listeners who is talking. This system is controlled from a rack mount electronics box.

As I suggested after the Beijing meeting, this functionality could be incorporated into wireless laptops. This would be difficult to do with the delegates own units, but might work well with something like the ASUS Eee PC and a $10 desktop microphone. The software used for remote teleconferencing could be used in the room.

Much of the time the attendees are intent reading and typing at their laptops. This can be a bit disconcerting if you are giving a presentation and the audience doesn't appear to be paying attention. But often the audience is actively working on what you are talking about, reading ahead in the presentation, searching and preparing counter proposals.

One Council member was not able to attend in person and so was to join by teleconference. This is done using POTS equipment, not via the Internet. This brings up one of the strengths of this ad-hoc arrangement of technology: the system is relatively robust, due to the different systems used, at the price of complexity. If one fully integrated system was used, the meeting would not be able to continue if the system failed.

The meeting layout is not perfect the U shape allows everyone to see each other, but is an inefficient use of space and the size makes it hard to see the screen at one end of the room and the chair at the other. Perhaps MIT's TEAL flexible learning centre room design might be suitable for meetings, with deligates at round tables and screens around the walls.

Posted by Tom Worthington at 10:02 AM