The most complicated tap in Canberra

The public library I complained about in February seems to have fixed their water wasting urinal by installing an infrared movement detector which activates when someone is present. But another problem in the same toilet is the bizarrely complex hand basin tap. The sign on the tap reads: "To turn on tap pull lever out. Turn Level to the Left for hot. Turn lever to the right for cold.". The problem is that an elegant but difficult to use tap has been installed which is not suitable for a public facility. The library should replace the tap with one which is easy to use and remove the sign.

Donald Norman discussed the design of tap handles in his book "The Design of Everyday Things". The technical details may be complex, but the idea is simple: the tap handle should work the way the user of it expects. 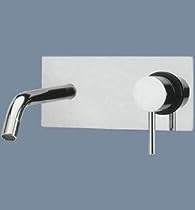 In this case the tap handle looks like a round knob with a bar sticking out, much like the "Justyna" model depicted here. The usual way this would be expected to work is you turn it to get more water. Even when you read the instruction to "pull lever out", it is not clear what the lever is ( there is a thin round bar, which does not look like a lever).

It may be difficult for the library to retrofit two conventional taps in place of the mixer (they would have to drill another hole through the stone facing). A simpler option would be to install a conventional knob which you turn for cold water only. If the cold supply is at too low a temperature to be comfortable, then hot water could be automatically mixed or a small water heater installed.

ps: Better than the infrared flush urinal would be a waterless urinal, or a single flush per day system, as used in the six star rated Australian Ethical Investments building.
Posted by Tom Worthington at 11:46 AM

I hate the sensor driven taps. Because the sensors often don't work and you end up going from tap to freaking tap to find one that does!