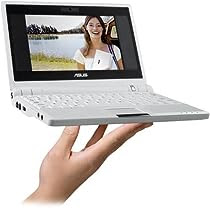 The ASUS Eee PC diskless Linux subnotebook computer is now being offered for purchase on Amazon.com. Initially only the 7 Inch screen 4 GByte flash drive model is available. One disappointment is that this supposed $US199 computer is now $US399. A cheaper model with less memory may be available later (making it effectively a portable Linux thin client machine and indicated by its name as the Eee PC 2G Surf). A more expensive unit with a 10 inch screen is also promised.

The Eee PC is being offered in the UK as the RM Minibook by Research Machines. They are are positioning the miniBook as a student computer with sales via schools.

ps: The ASUS Eee PC appears to have been added to Amazon.com's catalog on or shortly before 3 November 2007, as indicated by the date on the Google cache copy of the web page: 3 Nov 2007 07:25:59 GMT. So far it has not been added to the UK, French, German, Japanese or Canadian Amazon catalogs.

Posted by Tom Worthington at 9:28 AM

The price seems to have increased to $US429.99 for the ASUS Eee PC, which is unfortunate. I suspect this is due to a high demand for the units from early adopters.

The price of the ASUS Eee PC via Amazon.com has dropped back from $US469.99 to $US399.99. This is the price ASUS announced originally and it is not clear why it went up by $70 for a few days.

The ASUS Eee PC is now available from Amazon.com in the USA, UK and Germany.