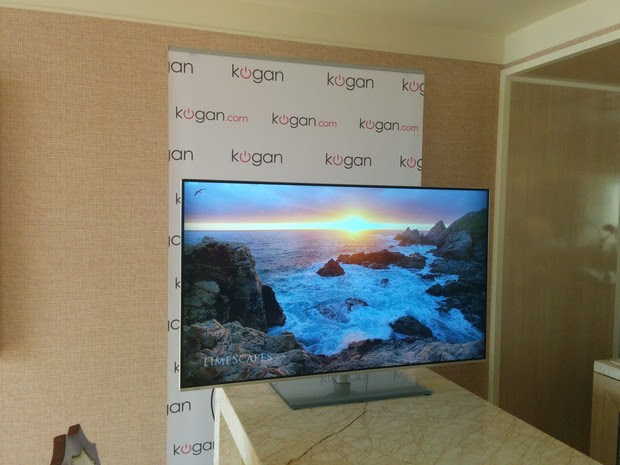 Kogan have announced they will offer a 55" Ultra High Definition TV for $1000. As well as the4K (3840x2160) resolution, this has Android 4.2, Wi-F, Ethernet, 4 USB ports and a Micro SD slot. It is less basic unit than the Seiki Digital 50 inch model, which is US$999 on Amazon.com. A use for such large screens I would like to try is as a desktop computer display. At 55 inches, the monitor is so large it could stretch across the whole of the back of a 1200 mm desk. Mounted on the partition behind about 140 mm above the desktop, it would extend up to the hight of an office partition. The screen would fill much of the peripheral vision of the user and create an immersive effect.

The user is unlikely to be able to use the screen as one large display and would instead put their main window in the lower centre, and then move items used occasionally, such as a diary, off to the side and family photos above. The screen would in effect become a pin-board. The flat screen close up may create some problems, with the outer edges harder to see. This could be corrected by distorting the image to enlarge the images at the edges. When sitting in the centre of the screen everything would look in proportion, with the screen's edges appearing to curve inwards. Standing away from the screen it would look distorted.
Posted by Tom Worthington at 9:09 AM