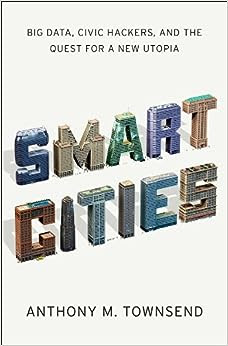 The book "Smart Cities: Big Data, Civic Hackers, and the Quest for a New Utopia" (W. W. Norton & Company, 2013) by Anthony M. Townsend, looks at how cities can use information and communications technology. Townsend covers a lot of territory, looking at cities not only in the USA but in developing nations and issues from security, to the environment. Unfortunately the narrative is a little hard to follow and for the first hundred pages I wondered what the book was about. It was only when Townsend started relating his own experience of building community non-profit WiFi services in New York that the book started to make sense. The heavy emphasis on US developments of technology is also a little distracting. There is barely any acknowledgement that many ICT developments came from elsewhere (for example, the World Wide Web from Europe, the ARM chip from the UK and WiFi from Australia). Townsend raises many issues but then seems to move on to another. This is a useful book to dip into, but frustrating to read from start to finish.

The attempts Townsend relates of communities to provide ubiquitous broadband are very relevant to current Australian discussions of the National Broadband Network (NBN). He relates lobbying of government by telecommunications companies interested in not having a public sector rival. Townsend is suspicious of private company involvement in community networking. He portrays non-profit community providers of broadband in USA as heroes and credits mobile data networks in developing nations with being important in economic development, However, Townsend seems reluctant to acknowledge the role of telecommunications companies in providing wireless broadband in developed nations. There has been a problem that the telcos have charged prices for mobile broadband. For Australia I have suggested that mobile broadband could complement cabled services, with some govenrment intervention.
Posted by Tom Worthington at 8:24 AM