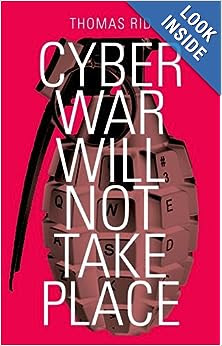 Thomas Rid's book "Cyber War Will Not Take Place" (Oxford University Press, 2013), is readable and well researched. It argues that on-line attacks on nation states will be at most an adjunct to the use of conventional military force. The limits to the effectiveness of an on-line attack are discussed, using documented cases. The conclusion is that cyber-war will not happen, because it is unreliable in its effect, cannot be well targeted and can't cause violence directly. Surprisingly, Queensland, Australia, features prominently as one place where a cyber-attack on infrastructure had a significant effect. In 2000 the Maroochy Shire SCADA system was commanded to dump millions of liters of raw sewage into waterways.

Rid soberly counters the hype around "cyber-war", but perhaps goes too far in dismissing it altogether. There are many weapons which have uncertain military value, but are nonetheless made ready for use. An example is Barnes Wallis' bouncing bomb, used to breech the Möhne and Edersee Dams in WW2. The bomb had a mostly indirect effect, by breeching the dam wall, cutting off hydroelectric power and flooding the land below. The bombs has some propaganda value, but were of limited military value.

It is unlikely there will be a pure cyberwar, but very likely that any future major conventional war will involve extensive use of on-line attacks. These will be intended to cause confusion and degrade the enemy infrastructure to make conventional kinetic attack more effective, rather than replace it.

Compared to conventional warfare, cyber-war takes little hardware. Office computers are cheap compared to missiles, submarines and supersonic aircraft. A country with a conscription army also has a ready supply of recruits, who can be screened for computing skills. Reserve personnel, who work in the ICT, can be used, with most of their technical training taken care of by their civilian employers (previously I proposed such a "Australian CyberWarfare Battalion").