Book About Five Years in Goa 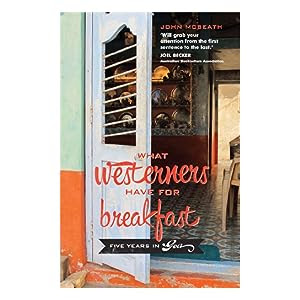 On the new books display at the National Library of Australia today I found "What Westerners Have for Breakfast: Five Years in Goa" by John McBeath (Transit Lounge, 2013). McBeath, partner and dog moved from Melbourne to India in the 1980s with the aim of setting up a guest house. The books recounts the pleasures and frustrations of their time. I  lived in an Indian village in Goa for three weeks, not far from the location of this book and it brought back memories, both good and bad, for me. I have only got as far as chapter three of nineteen, but already I am not sure I like  the author. The story is well told with interesting self-deprecating anecdotes. But it is frustrating to read the problems which the ex-patriots make for themselves, such as in bringing a dog with them.

The book is a little dated, with the description of the scarcity of telephones and difficulty of long distance calls being a thing of the past. Even eight years ago, when I visited, mobile phones were very common, with coverage across Goa (except where screened by the thick walled metal oxide traditional houses).
Posted by Tom Worthington at 4:32 PM