Reports on the effect of Typhoon Haiyan (Yolanda) have been slow to arrive due to the severity of the event. Reports through my colleagues at the Sahana Foundation and the Global Disaster Alert and Coordination System (GDACS) are indicating the severity of the situation in the Philippines:

Many government staff and emergency workers are themselves causalities. Debris block roads, electricity supply is limited, as is fuel, vehicle tires, food, clean drinking water. Maintenance of law and order is also an issue. 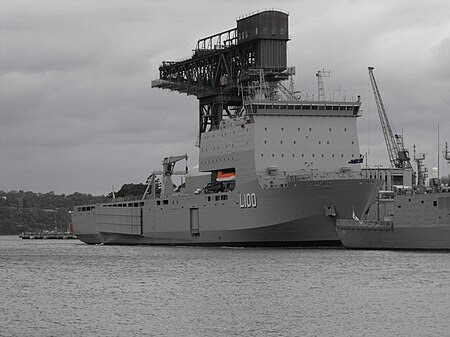 In 2011 landing ship HMAS Choules (former RFA Largs Bay) was commissioned into the Royal Australian Navy. Choules has a flight deck for heavy Chinook helicopters and two 2 Mexeflote powered rafts to transfer cargo to shore. Choules also has a diesel/electric propulsion system, which may also be of use for supplying on-shore power.

There were early problems with Choules, but these have been overcome an it performed well in recent military exercises. The Australian government should now make urgent preparations, should Choules be required for Typhoon Haiyan relief operations.

Unfortunately the more capable Landing Helicopter Dock ship HMAS Canberra,  is not due to be commissioned until 2014..
Posted by Tom Worthington at 10:40 AM