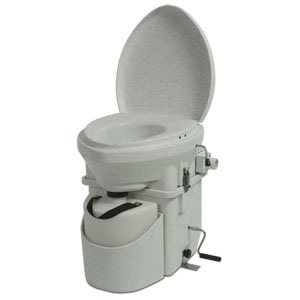 Caravan World (June 2011) has an article "Dumping the Way", discussing the difficulties of "dump points" for emptying caravan toilet tanks. I was curious as to why Composting Toilets

are not in common use for caravans. These look similar to cartridge systems, but instead of the waste being held in a sterilizing liquid, it is composted. The result is a very small amount of solid matter. Some units evaporate the urine using a heater, this would not suitable for a caravan which spends a lot of time away from mains power. But other units collect the urine in a tank for emptying (which would be far less smelly and messy than a tank with solids in it). In this case just a small fan (which can be 12 volts) is needed to draws air out to remove smells.

An example is the Nature's Head Dry Composting Toilet

. There is a description of replacing a tank based toilet on a boat with one of these. Most of the complexity seemed to be in removing the old contaminated waste tank from the previous toilet.

There is also the "Kiwi Bog" which is designed to be placed in a caravan shower. This unit does not have a built in tank, but is designed to be plumbed in. It should be noted that urine is considered "blackwater" and should not be plumbed to a "greywater" tank used for the shower.
Posted by Tom Worthington at 11:32 AM