This was one of those magical days, when the light shimmers over Sydney Harbor, the ferris wheel of Lunar Park glows like a crystal ring under the Harbor Bridge. 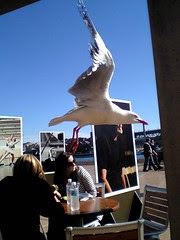 A convoy of vintage cars stopped at the steps of the Sydney Opera House and a wedding party in 1930's costumes stepped out. They then processed to the reception at the front of the Opera House overlooking the harbor. Opting for the cheaper seats, we had a take-way package of gourmet sandwiches and glasses of the domestic sparkling Chandon wine, purchased at the Drama Theatre. One of the tables was free under the The Colonnade
outside the theatre, giving a 180 degree view of the rocks, bridge and harbor. The only problem was fending off the seagulls, trying to eat lunch.

Stephen Page investigates what it means to be Aboriginal in the 21st century, asking important questions of identity. Based on personal observations of people tracing their bloodlines and re-connecting with traditional culture, ID provokes perceptions in contemporary society.

Torres Strait Islander Elma Kris is inspired by customs passed down through families for generations. Reflecting the strong links between communities and their natural environment, About explores the mood of the winds as they move across land, sea and sky signifying key moments in time.

At the heart of Bangarra Dance Theatre are challenging social and political questions. As Indigenous people, who are we and where do we belong?

Posted by Tom Worthington at 12:23 PM