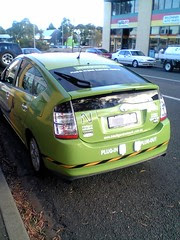 In Canberra today I noticed a Prius plug-in hybrid car. These are not that unusual, being a hybrid car which has been modified with a larger battery pack and a socket to allow them to be recharged from the mains power supply, or a renewable source, such as a solar panel or wind generator. This car was unusual in that it had a second socket marked "plug out". I assume this allows the car to supply electrical energy. The car was marked "Country Energy" with a web address for "Intelligent Network".

Such a plug out car could become a mainstream product in the future, supplying peak power back into the grid from the expensive batteries in the car. In the short term these are more likely to be of use in remote areas where mains supply is not available, in developing nations where a reliable mains supply does not exist and for military and emergency applications where the mains has failed. As an example, the Hawkei Protected Military Light Vehicle (PMV-L) might be equipped with power out to supply electronic warfare equipment.
Posted by Tom Worthington at 6:54 PM