Buying a car should not be so hard 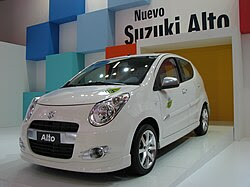 My Daihatsu Sirion is now 12 years old, so I thought it time for a new car. Daihatsu no longer sell cars in Australia, but there is the similar Suzuki Alto. This is an Indian made five door car with a three cylinder 1 litre engine, like the Sirion. It is sold in other countries as the as the Maruti Suzuki A-Star, Suzuki Celerio or Nissan Pixo. The Alto costs $AU12,000 drive away, for the cheapest model in Australia.

Being conscious of greenhouse gas emissions and limited fossil fuel supplies, I considered other options. The first option was not to buy a car at all and share one via the GoGet Share Car scheme. With car share I would pay a monthly fee and be given an electronic key which unlocks cars in reserved parking spaces around cities. GoGet happens to have the Alto in its fleet, as well as larger cars. But there is no share car near City Edge in Canberra.

The next option was to buy an electric car. I have had a test drive of the Mitsubishi i MiEV small electric car. This looked very practical, but is not yet available in Australia. Also if charged from ordinary coal sourced electricity it will be just as polluting as a petrol car and would cost about three times as much to buy.

The next option was a hybrid car. However, I only need a small car and there are no small hybrid cars on sale in Australia. Larger hybrid cars, such as the Toyota Prius, are not much more fuel efficient than a small conventional car and cost about three times as much. As I do not drive that much (bicycling to the office during the week), it is unlikely I would ever recover the additional financial or environmental cost of a hybrid car. Toyota did offer a start-stop system and regenerative braking on some of its small cars in Japan. This provides almost as much fuel efficiency as a hybrid car, without the cost of an electric motor or extra batteries, but these options are not avialable in Australia.

There is a new crop of Korean, Chinese and Indian small cars coming to Australia in the next year or so. These may include the Hyundai i10 and other City Cars. There is even the luxury Aston Martin Cygnet, based on a Toyota iQ. But none of these have arrived yet.

So I looked on the web for details of the Suzuki Also on sale in Australia, from places such as Rick Damelian and National Capital Motors. It looked relatively easy to buy an Alto, as there there are no engine options, one body style and just two gearboxes offered: manual and automatic, in two trim levels: GL GF and GLX. So apart from colour, there are only four options to choose from. All models come with 6 air-bags and anti-skid brakes. The most significant addition with the more expensive GLX model is electronic stability control.

However, going in to buy a car was still a very frustrating process. This started off well: I went in and had a test drive and was told of the features and options. The lack of options seemed to cause the sales-person some frustration, they kept asking what my requirements were, what might I use the car for? I replied I needed a small car to replace a Sirion. As there were only four Alto options to choose from, there did not seem much to discuss.

Australia has laws about truth in advertising and so car dealers are now required to advertise a "drive away" price. This seems to cause them considerable frustration. I was shown a price many thousands of dollars more than the drive-away price. To my surprise this was first set out on a sheet of ruled A4 paper, with all the various components adding to the cost itemised, leading to an absurdly high price, then various "discounts" subtracted. I was not sure if this was due to legal requirements to explain the details to me, or a sales trick to cause buyer confusion. With those options explained the same details were then presented to me on a computer printout (I hope they were the same details, as there were so many it was hard to tell). I then had to talk to three different people at the dealership, one of whom wasted a considerable amount of time trying to sell me useless add-on treatments for the car. Other staff did paperwork which did not seem to be something I needed to be there for.

The process of buying a car takes hours. In the case of an up-market model with many options this may make sense. But this in part seems a trick to keep the customer in the store so long that they have made such an investment in time, they feel obliged to buy. For a low cost car with few options, it cannot be economic to sell cars this way. It seemed to me that same sales process was being used, because that is how upmarket cars are sold. The sales person perhaps thought they were giving me good service, but it seemed more they were just going though the motions. I did not find this a pleasent experience.

For low cost cars what is needed is a streamlined process, where it is assumed the customer has looked at the few options available online in advance and just needs a test drive and some questions answered. That should reduce the price of a car by thousands of dollars and reduce the process to less than ten minutes.
Posted by Tom Worthington at 12:13 PM