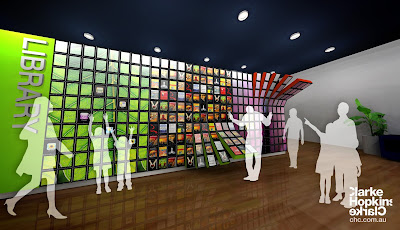 According to Gizmodo, architects Clarke Hopkins Clarke have suggested stacking hundreds of Apple iPads on a library wall to display iBooks. A wall of iPads in a library is an intriguing idea, but would cost twenty times as much as some alternatives. There are much more affordable and environmentally efficient ways to build a video wall to display e-Books.

Many libraries now use large flat panel displays. These can be used to show book details. The latest of these displays used LED backlit LCD panels, which use less power than old plasma screens. One computer can drive many displays, making the setup much cheaper. A video projector can also be used to make a wall size display which can show one large image, or well as many small ones. At the Australian National University's famous " CSIT building N101 seminar room" I have used the full wall display for presentations. Three high resolution projectors cover one wall of the room and a computer with three video interfaces knits these into one large desktop. The wall has also been used for video art display. The wall can display cinema style video, or when the room is needed for other purposes, simply switched off.

The wall depicted by Clarke Hopkins Clarke has thirty columns of iPads, ten high, or 300 in total. The wall would cover 15m2 and the iPads would cost US$150,000. The same wall area would require about 66 LCD screens and cost US$33,000. Using video projectors would cost about US$7,000.
Posted by Tom Worthington at 10:25 AM