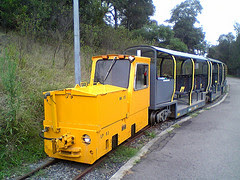 A hidden gem for railway enthusiasts in Sydney is the Newington Armory Heritage Railway. This is a 610mm, two foot gauge network used to transport munitions around the former Newington Arms Depot. It may be a surprise to learn the New South Wales Government owns this battery electric train with articulated passenger carriages. 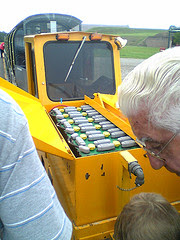 The tacks were laid in 1909, with carts originally pushed by hand. Battery powered electric locomotives were introduced in 1940. The GEMCO George Moss and Co locomotive used to pull the tourist train around 7.6 km of track was built in 1963. The tour starts near the former gateway to the complex (which is the ticket office). It travels past what is now the armoury theatre (with the Sydney Olympic Park Lodge YMCA visible up the hill), past what are now artists studios and the Birds Australia Discovery Centre. The train then enters an area restricted to the public, stopping at several points to view the buildings used to store material. 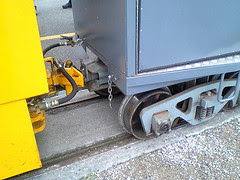 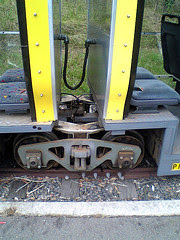 Ordnance wagons have been converted into passenger carriages, with seats, roofs and doors. The wagons are unusual in being articulated. Conventional couplings are used to the locomotives, with one at each end in a push-pull arrangement. As the tour guide kept emphasising, this is a real railway, which is required to meet railway safety standards. 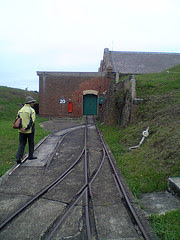 The standard tourist trip lasts one hour and covers the Royal Australian Navy section of the former arms depot. This includes a section off limits to the public. This does not include the section built to US specifications in WW2 by SeaBees for the US Navy (in use until 1946). 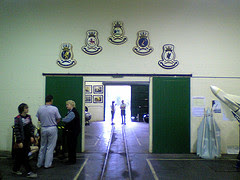 The highlight of the tour is when the train travels through the centre of one of the buildings and an array of bombs, shells, torpedoes, guided missiles and military shields are briefly glimpsed. The train the stops allowing the passengers to get out and inspect the display. What is emphasised is that these are not facsimiles, but real weapons made safe by removing the explosives. As well as assorted naval shells are Sea Cat anti-aircraft missiles, Harpoon cruse missiles, air launched and submarine torpedoes and the Australian developed Ikara anti-submarine missile, complete with acoustic homing torpedo.

Concrete stores lighters (barges) were unloaded on the wharf near the present day Armoury Warf Cafe. The armoury was set up in 1897 for the Royal Navy and closed in 1999.

One of the stranger sights on the tour is a party on two wheel Segway battery vehicles. But this fits with the history of the site, which had "Electromobiles" (battery powered vehicles), with petrol powered vehicles banned due to risk of explosions. The usual mode of transport for most staff was by foot or bicycle.

The wetlands next to the armoury are permanently closed to the public due to the presence of unexploded ordnance.