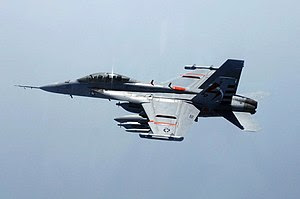 Professor Chris Baker talked on "Aspects of imaging radar" at The Australian National University, 28 January 2010. He pointed out that high performance computers now allow synthetic radar images to be created on-board aircraft, where previously hours of processing on a ground station would be required. It occurs to me that this could be applied to the Super Hornet EA-18G Growler aircraft the Australian government has ordered. These aircraft could then be used in conditions not suitable for the Boeing Wedgetail.

As the EA-18G aircraft will be equipped with radar frequency transmitters and receivers, these could also be used to provide 360 degree radar coverage around the aircraft. Australia has ordered four Boeing Wedgetail Airborne Early Warning and Control aircraft with very large radars and processing capacity. But these are modified airliners and so are slow and vulnerable to attack. The EA-18G is much smaller and faster, but would not normally be considered for a flying radar picket, due to limited space for antennas and processing computers. But as Professor Baker pointed out in his talk, processing power can now be fitted into a much smaller space and can overcome many limitations of the antenna size. High performance computers can be built from video game chips and podcasting can be used to send the resulting images directly to troops on the ground.

Posted by Tom Worthington at 12:31 PM