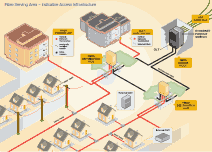 NBN Co, who have the job of building the National Broadband Network for Australia, plan to use a passive optical network, in particular GPON or ITU-T G.984. This reduces the amount of electronics needed in the network, reducing the cost and increasing the reliability. It also allows the speed of the network to be increased by replacing relatively few electronic components and not changing the optical fibre. In addition it reduces the number of fibres which have to be run long distances.

The passive optical network uses optical splitters to divide the signal on one optical fibre so it can be distributed to several dozen homes (up to about 100). Each home gets the signals sent to all homes, so encryption has to be used for privacy. Data sent from the homes is sent with a multiple access protocol,, with each sharing some of the fibre capacity.

It is not clear from the planning documents, but hopefully multicasting will be supported by the passive part of the network. That is for sending the same data to many people, for example for digital TV, the one optical signal will be sent to all houses, rather than sending multiple copies of the same thing to each house.

Posted by Tom Worthington at 10:42 AM