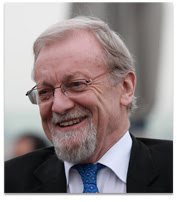 Today the Australian National University appointed Gareth Evans to replace Ambassador Kim Beazley as Chancellor. Mr Evans was Foreign Minister and President of the International Crisis Group. In a fictional future history "Canberra 2020: World Information Capital" I made Mr. Evans the UN Secretary General, which caused him some amusement.

Posted by Tom Worthington at 12:02 PM