Some time ago I suggested a car radio with a socket to hold an iPhone/i-Pod touch. Dual Electronics have now produced such a device with their Dual XML8100

. This looks like an ordinary car radio, until the front panel is hinged down revealing an iPhone/touch docking station. This is not quite as simple or low cost as the design I suggested, but looks workable and reasonably priced at around US$100.

The unit is designed to work with older model iPods, not just the iPod Touch and iPhone. The full manual for the unit is available online. 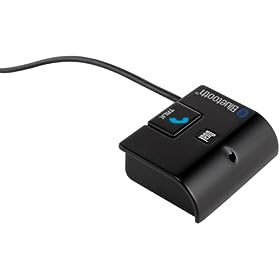 It should be noted that to use the phone functions of an iPhone, the optional Dual BTM60

Bluetooth Interface Module is required. This is designed to clip to the sun visor and includes a noise cancelling microphone. It should be noted that the iPhone doesn't have an external antenna socket and so may not get good phone reception if mounted low on the car dashboard.

While it works with a large range of iPods, this has limited the options for the designer. The older iPods are designed to only be operated when upright, that is in "portrait" mode. The iPhone and iPod touch can also be operated lying down, in "landscape" mode. This is the way I suggested having them in the car, so they fit better with the standard radio slot on the dashboard. With the Dual XML8110 the iPod projects up above the radio slot, where it may interfere with other car controls.

Also the Dual XML8110 has increased complexity and cost due to having two sets of controls and displays: one for when an iPod is not used and another inside when the panel is swung down and the iPod inserted. It would have been simpler and cheaper to have the one set of displays and controls.
Posted by Tom Worthington at 6:00 PM