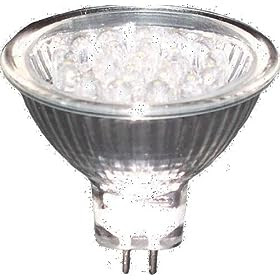 At Kmart I noticed a Mirabella brand 12 Volt LED Dichroic MR16 light for about AU$15. These are similar to units sold by Amazon.com as LED 1 Watt MR16 GU5.3 Base. These are claimed to use 65% less energy than an incandescent globe. It has 15 small LEDs in place of one halogen bulb and uses only 1.1 Watt, instead of the usual 50 Watts. But there are a few catches: The MR16 lights are usually halogen lights, not incandescent globes. The halogen lights are more efficient than normal globes and so the LEDs are less of an improvement than otherwise. Also the LEDs give much less light than a 50 Watt globe (only 15 Lx at 3 metres). They also have a very focused beam (15%) compared to other units.

The LEDs are described as "White" (6500K), but have a blue tint compared to halogen lights. Another catch is that the LEDs do not work well with electronic transformers or dimmers. I found that on its own the LED light would not work at all, but might work if there were several halogen lights plugged in parallel with it. The LEDs cannot be dimmed, they flickered if the dimmer was turned way down.

These units would have some uses. If there is an area with a very large number of down lights, the LEDs can be used to provide sufficient light and an aesthetic look.

There are more practical units which use three 1 Watt LEDs but these cost around US$30 each (MR16 12V Warm White Light bulb). What might be more practical is to use lower power halogen lights (such as 20 Watt).

There are also 5 Watt halogen lights available, but these generally use a smaller fitting (MR11). Perhaps what is needed is a small metal disk to adapt the smaller MR11 to the larger MR16 fittings (an adaptor for the small electrical pins of the MR11 would also be needed). For less than $2 each, the power consumption of the lights could be cut by 90%. Of course it would be better to install the lower power MR11 in the first place, or even better another type of low power fitting. But there are many 50 Watt MR16 untis out there wasting power which could be converted.
Posted by Tom Worthington at 3:12 PM

At the supermarket I noticed 3 Watt LED replacements for MR16 halogen down lights at $AU11.99 each. These are cheaper than the Mirabella 1 Watt units and look better made.