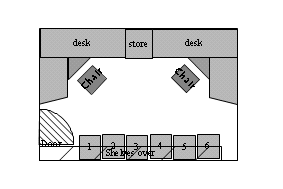 One way to reduce energy use in offices is to have more sharing of printers, but another way is more shared office design, with more people per office. The example I will use is for visiting and adjunct staff at the School of Computer Science, in the Computer Science and Information Technology building (CSIT), ANU, Canberra. A simple arrangement could increase the number of people per office three to six times.

The CISCO Connected Workplace proof-of-concept project proposed reducing space per employee by 40% from 160 to 106 square feet, for general administrative personnel. CISCO estimated a reduction in energy use through this and other techniques of 58% from 423.9 W to 178.7 W per employee.These figures are comparable with those my students estimated in the Green ICT course.

One way to reduce energy consumption of a building is to make better use of the space. One way to do that is to make sure the space is fully utilised. Like other academic institutions, the ANU has Academic Affiliates. These are people who are not full time staff, but have an association with the institution. They provide a valuable connection between the university and industry, government, other research organisations. Some are on campus daily for some days or weeks, others visit for a few hours or a day every few days or weeks.

Normally a professor would get their own dedicated office, and a lecturer a smaller office. Such an arrangement is wasteful, both of space and energy, for affiliates who may only use the office a few days a month.

Some institutions solve the space problem with open plan offices. However, as a high status organisation which places a premium on the thinking time of its people, this would not suit the ANU. One alternative used is to place two staff in one office. This doubles the space efficiency, but more is possible.

A simple option is to time share the offices, with provision for more staff to share the offices at different times. A workable option would be up to six staff per office. According to "The Google Way: How One Company is Revolutionizing Management As We Know It" (Bernard Girard, No Starch Press, 2009) six is the optimal number for a team. So this is a reasonable number of people who can work out an arrangement together (it is not coincidence that the six cup coffee pot is the most common and the original AppleTalk protocol applied six computers in work group). Also it would be difficult to fit storage for more than six people in a typical office. With six in one office, they each get about one day a week, or about two days a week if the office is shared by two people.

There are many shared office designs featuring hot-desking. These may involve the staff member collecting a wheeled unit with their items from a locker room near the foyer of the office building and taking it to an allocated cubicle. This arrangement would not suit the ANU environment. Apart from the implied reduction in status for the people, it would need a large scale to be feasible, extensive changes to building fit out and would also eliminate the informal interactions between personnel which are valuable in a research environment.

The CSIT building is currently partitioned for two sizes of offices, the smaller for lecturers and ones twice as large for professors. For visitors and adjuncts, two may be allocate one office. Offices have one long wall fitted with floor to ceiling adjustable shelves, intended for a large number of books academics typically have.

Visitors and adjuncts tend to have fewer books, allowing for a reallocation of space. If the bottom two shelves are removed, this provides a desk height floor space. An under desk mobile pedestal unit could be placed in this space. These units are about 500 mm wide, so six units would take up about 2m, allowing for some space between. With one drawer unit allocated to each person, the shelf space above each drawer unit could also be allocated to that person.

Ideally there would need to be some secure storage for paperwork and other items. This could be done with lockable cabinets and vertical filing units replacing some of the shelves. This would provide about .4 m3 of storage per person, or about the size of five filing cabinet drawers, or one common size vertical locker.

With only six people to a room, there would not be a need for a complex booking system. But some form of online noticeboard would still be needed to say who was going to be in when. Also some way to allocate telephone numbers would be of use. Each person could be allocated their own telephone number, which would be forwarded when they were not at the office.
Posted by Tom Worthington at 11:47 AM