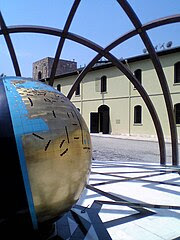 The Islamic Science and Technology Museum gets a mention in "Fathers of Invention: What the Muslims Gave the Scientific World" by Jennifer Hattam (Wired magazine, of June 2009). The museum celebrates scientific and technological discoveries from Islamic scholars and makes the point Islam is not anti-science. Examples from the ancient world include the Alembic, for the distillation of liquids and the Astrolabe, a mechanical calculator for navigation. I was fortunate enough to visit the museum in Istanbul shortly after it opened, in May 2008. It is well worth a visit.

Also there is the Timeline of science and engineering in the Islamic world in Wikipedia. I added the museum to the timeline and in the entry for Gülhane Park, where it is located.
Posted by Tom Worthington at 4:26 PM