Alliances under austerity: what does America want?

Greetings from University House at the Australian National University in Canberra, where Dr Bates Gill, CEO of the US Studies Centre is speaking on "Alliances under austerity – what does America want?". Dr Gill said it was a delight to spend time learning more about the Australian end of the relationship with the USA. He has spent three decades writing on strategic issues in the Asian region, with numerous books 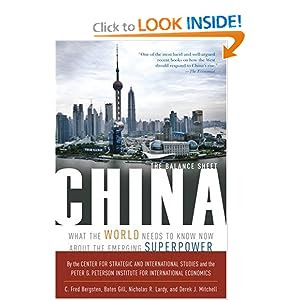 Dr Gill  pointed out there was a more diffuse threat environment. He suggested that the USA wanted more flexibility and independence from its allies. He suggested that this predates the global financial crisis. He suggested the framework for security should be broadened to include cultural engagement(seems a good idea to me as the USA on its own has not been good at winning hearts and minds).

In my view what seemed to be missing from Dr Gill's  analysis was they type of soft diplomacy used by China, with a combination of very targeted aid and economic investment. On a visit to Samoa, I noticed that the US Peace Corps office was being guarded by local staff wearing Chinese People's Liberation Army caps.

While on a visit to Sri Lanka recently, I was surprised to find the hotel full of US military officers there for a Multinational Communication Interoperability Programme workshop. Down the coast, China funded the Port of Hambantot which has strategic implications.

Dr Gill suggested more prepositioning of US equipment in the Asian region would be needed. This is a somewhat controversial issue in Australia, with a recent article in  Online Opinion magazine asking "Is Central Australia the geostrategic centrepiece in the USA's new look east policy?".

Dr Gill suggested  the USA wanted to engage China in ways which both assure and deter. He said this would be "tricky".


I suggest that Australia needs to be clear on what it wants from the relationship and what it needs to contribute and the limits of USA's capabilities. As an example, it appears that Australia is planning to build 12 long range, very large, conventional submarines, for the Collins Class Submarine Replacement Project. Essentially Australia will attempt to build conventional submarines using technology from the USA's nuclear boats. There are both strategic and practical difficulties with this approach.

If larger replacements for the Collins Class Submarines can be built, they will be integrated into the US submarine strategic forces. This may involve Australia in wars far from its shores, preempting Australian political decisions. This could result in Australia being the target of retaliation using strategic weapons, as a way for the USA's opponents to send it a message.

The USA has no recent experience of building conventional submarines and Australia has a poor record of building such submarines. It is almost certain that the project will result in the underwater equivalent of the failed US Zumwalt Class Destroyer project. Australia will spend  billions of dollars and after more than a decade have, at best, one operational submarine. An alternative strategy would have European built submarines of a proven design, which will protect Australia, rather than project power.


One issue Dr Gilldid not address is cyber-warfare. China is reported to be heavily investing in this area, partly because it is cost effective. So perhaps the USA and Australia should be investing more in this area. Australia regularly hosts military exercises, where Australian, US and other forces practice. Some of these are "staff" exercises, run in an office with no real weapons, others have ships, aircraft, vehicles and tens of thousands of personnel. Alongside this can be cyber-war games. At present this is seen in Australia and the USA as a secretive practice for a very small number of personnel. I suggest a change of view is needed, to where it is seen as a mainstream activity, which many personnel will be involved in, alongside civilian security agencies, police, industry and academia. It needs to be realized that the most potent cyber-weapons are civilian systems, not military ones (just as civilian aircraft and ships are taken up for military use during mobilization).


In this lecture, Dr Bates Gill, CEO of the US Studies Centre brings his considerable expertise of American policymaking to bear to examine how the effects of the global financial crisis and American budget crunch are changing the United States’ alliance relationships. As part of the US ‘pivot’ to Asia, Washington will have new expectations, requests and demands of its key allies, including Australia. How will financial decisions affect US strategy? Will this mean Australia has to share a higher security burden or could it lead to an increased voice and influence for Australia in shaping the US approach to the Asia-Pacific.

Dr Bates Gill commenced as CEO of the US Studies Centre in October 2012 after a five year appointment as the Director of the Stockholm International Peace Research Institute. He previously led major research programmes at public policy think tanks in Washington, DC (Brookings Institution and Center for Strategic and International Studies) and in Monterey, California (Monterey Institute of International Studies). He has also served as a consultant to US companies, foundations, and government agencies, especially with regard to their policies in Asia. He received his PhD in foreign affairs from the University of Virginia, and, in addition to his experience in the USA, has lived and worked for lengthy periods in France, Switzerland, Sweden, and China.

Posted by Tom Worthington at 5:12 PM

Email ThisBlogThis!Share to TwitterShare to FacebookShare to Pinterest
Labels: ANU College of Asia and the Pacific, defence, United State Studies Centre, US Pivot to Asia, USA