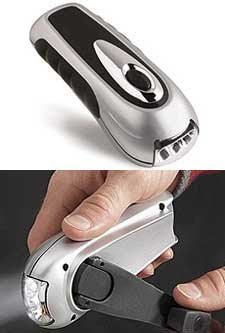 stopped working so I replaced the battery with a supercapacitor. This works very well.

The torch was no longer showing any light, no matter how fast I cranked it. So I removed four screws and took the cover off the flashlight.

This revealed a
LR2032 Li-Ion Rechargeable Button Cell in a holder. The cell was reading zero volts with my multimeter. 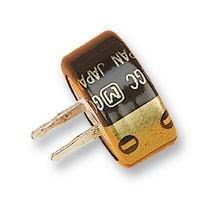 The dynamo was generating around 4 volts, so it appeared the battery had expired. I did not have a replacement battery to hand, but I did have a 1 Farad 5.5 Volt supercapacitor. The capacitor is a bit smaller in diameter than the button cell and four times as thick, but there was plenty of room for it in the torch case. I soldered the capacitor to the battery holder's terminals and packed in some neoprene tape to hold it in place.

The light works for about three times as long with the super-capacitor as it did with the lithium ion battery when new.

ps: There are numerous  wind-up flashlights available, but I have seen nine which come with a super-capacitor.
Posted by Tom Worthington at 5:49 PM